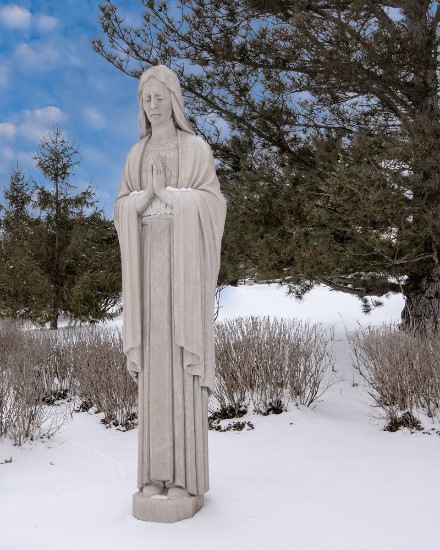 Archbishop Fulton Sheen once wrote of the Seven Sorrows of our Blessed Mother as being seven thrusts of the sword into her heart and soul culminating in Jesus’ crucifixion, which gave her emotional anguish on a par with His physical pain on the cross at Calvary.

Her love for mankind is great because she loves us as God loves us. Her love for us is shown beautifully in her Seven Sorrows. Tradition says that Mary’s heart was pierced seven times with seven swords of sorrow. This constitutes her seven dolours. Yet, Archbishop Sheen says that these seven swords were indeed seven thrusts of one double-edged sword—the sword being Jesus Christ Himself—one edge going into His own Sacred Heart first and the other edge going into her Immaculate Heart. Archbishop Sheen continues saying, an unsuffering Madonna to a suffering Christ would be a loveless Madonna. Who is there who loves, who does not want to share the sorrows of the beloved? Mary could not wipe away the tears of her children unless she herself had been their fountain. She has rightly earned the title Mother of the Afflicted.

The seven swords that pierced the Immaculate Heart of Our Heavenly Mother are:

At the Cross her station keeping, stood the mournful Mother weeping, close to Jesus to the last. Through her heart, his sorrow sharing, all his bitter anguish bearing. Now at length the sword had passed.
– Sorrows of Mary Song